Mountain Ghosts, In The Shadows

Wildlife conservationist Sheren Shrestha articulates the importance of community participation, citing the paradigm of the Kanchenjunga Conservation Area. He narrates his experience of assisting the KCA authorities in the blue sheep census, in one of the most remote parts of Nepal. 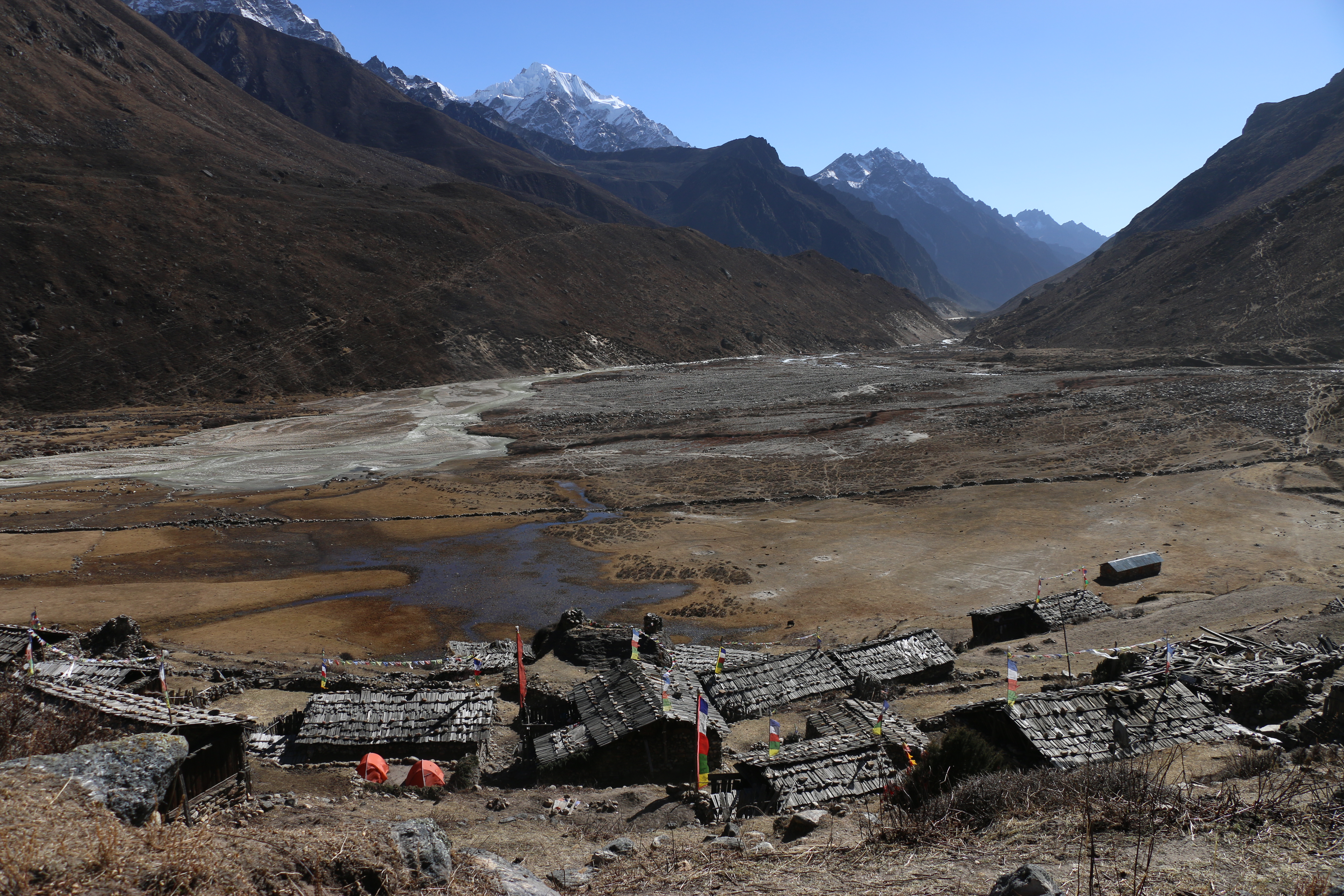 Perched atop a rock, I observed life winding up for the day in Yangma. A remote settlement of 11 households, nestled in the heart of a snow-leopard territory, Yangma, shimmered in the setting sun. For us, the work had just begun. We had to gear up for the annual count of blue sheep – the primary prey of the snow leopard, in the Kanchenjunga Conservation Area (KCA), in Eastern Nepal.

KCA was declared a Conservation Area in 1997. Since then, the World Wide Fund for Nature (WWF) Nepal has been assisting the Nepal government’s Department of National Parks and Wildlife Conservation (DNPWC) in the KCA.

On 22 September, 2006, the project management was formally handed over to the local community, represented by elected members forming the KCA Management Committee. Unfortunately, a day later, Nepal’s eminent conservation leaders – those responsible for bringing about the change in the KCA management, were killed in a helicopter crash.

Left with a serious vacuum in conservation, Nepal had an important legacy to preserve – participatory conservation involving local communities.

Ten years later, the KCA continues to uphold the legacy of its leaders. Focussed around the endangered snow leopard, the KCA conservation model facilitates community stewardship by ensuring awareness and reinforcing efforts to bring greater economic returns to the people. 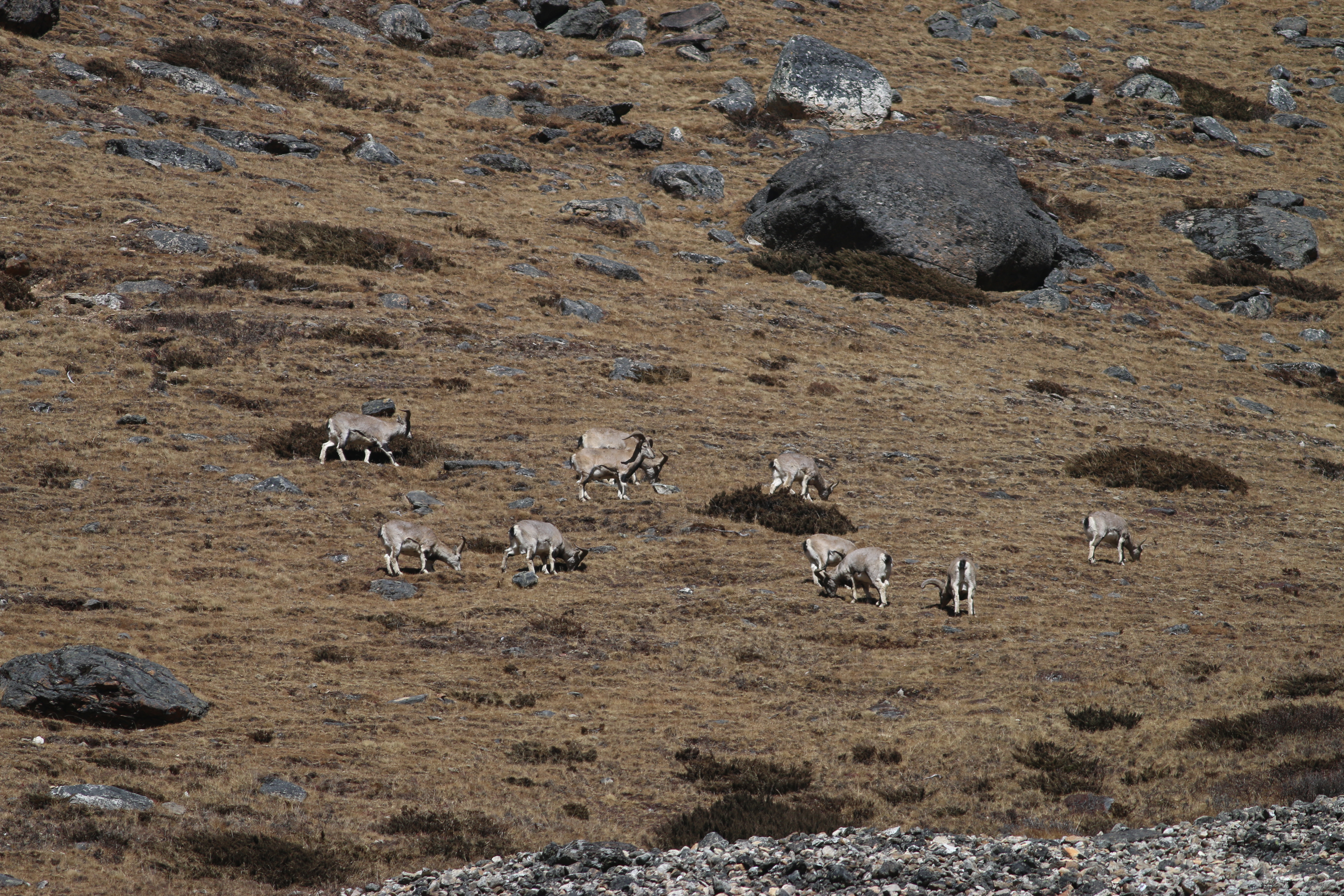 I was in Yangma to assist the KCA coordinate the blue sheep (Pseudois nayaur) count. These mountain ungulates, also known as 'bharals’, help sustain the snow leopard population of the trans-Himalayas. An estimated 20-30 blue sheep are devoured by an individual snow leopard annually. However, blue sheep are extremely good climbers, blending easily into seemingly inaccessible mountain surfaces.

“Herds (of blue sheep) congregate during late-autumn to breed,” explained my colleague Samundra Subba. We were to try out two methods – the double observer count, and the conventional method. In the conventional method we followed, two observers traverse each site together and record sighting details. In the double observer method, two observers explore the same site, separated in time by an hour, individually recording the details. Apart from the terrain, I was forewarned of the challenges presented by the ‘socio-political requirements’ of Yangma. I realised the full complexity of the situation only after our work began.

We worked along with four local Snow Leopard Conservation Committees (SLCC) – responsible for conservation activities in their respective areas: Yangma, Gola, Ramjer and Khambachen. Yangma SLCC comprises 11 members – a representative from each household. In such remote parts, conservation initiatives provide rare employment opportunities. For the villagers, livestock and potatoes constitute their only other means of income. Unwritten rules mandate that one member from each household must be employed; absentees were to be represented by resident family members.

The day we began, seven SLCC representatives were present in Yangma. (Suggestions to send visiting relatives from the remaining families were dropped after lack of consensus among the community.) Aided by two colleagues from the KCAMC – Dipesh Sharma and Susan Rai, we initiated the training: methodology, GPS use, blue sheep identification and data recording.

Over the next five days, we completed both the conventional count and the double-observer count at the nine planned sites.

The task however came riddled with challenges. Recording data posed a dilemma as only two members could read and write. There was much discussion regarding allocation of sites, considering differences in distance and consequently individual efforts.  An eighth SLCC member arrived in Yangma on the third day, throwing our plans into complete disarray.

Despite the complications, the locals were meticulous and thorough. They knew the landscape and its features, like they knew the nooks and crannies of their homes. For instance, once Dipesh and I accompanied two SLCC members – Phintso and Pema for a survey. To our surprise, Phintso with uncanny precision located a herd, exactly at the spot he had anticipated. Before we could even acknowledge the find, they had already counted 18 sheep.

Just as we were about to fill in the data sheet, Phintso said “Let us walk further ahead. Some of the herd must be sleeping. They will rise if they notice us.” Uphill, they counted over thirty sheep! Once again, Phintso said, "The forage is pretty dry; we will find more of them along the stream.” Our final count was 59 sheep.

The SLCC members though agreeing with the overall count, pointed out the three important sites we had left unrecorded. “Had we covered those, the count would have been around 700 – like last year.” said a member. 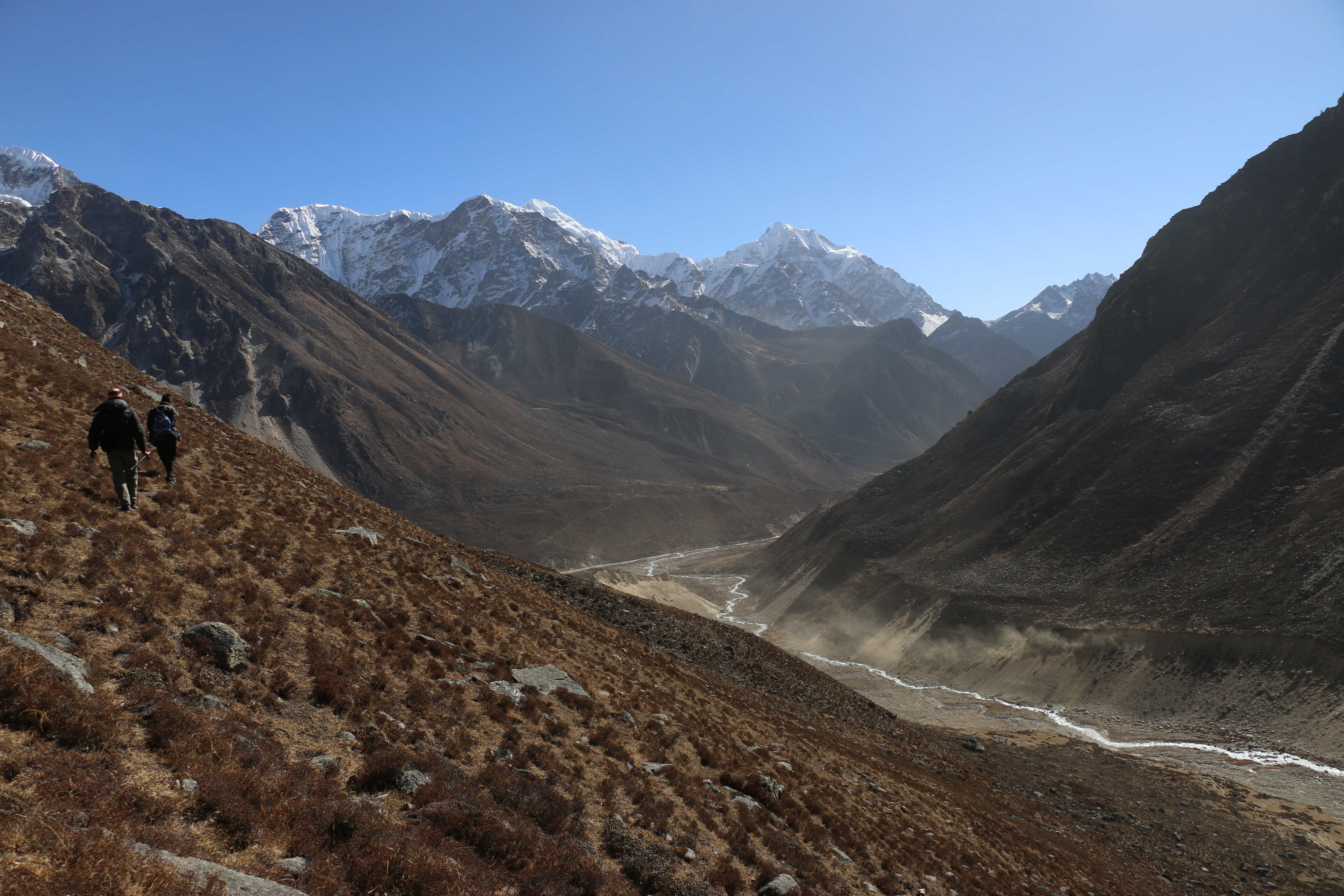 Blue sheep numbers in KCA have seen a rising trend from 1157 individuals in 2006, to 2000 in the year 2016, indicating positive returns of conservation interventions. Though the blue sheep population in the KCA supports 25-30 snow leopards, livestock too forms a part of the snow leopard’s opportunistic diet. People in Yangma revere the snow leopard as their gods’ pets, and are respectfully tolerant.

However, livestock killing by snow leopards results in strained relations, and in extreme cases, retaliatory killings. However, since 2006, a locally-run Livestock Insurance Scheme (LIS) jointly established by the KCAMC and WWF, has been providing relief in cases of losses, salvaging the strained yet reverential relationship between the snow leopards and the locals.  Furthermore, DNPWC’s Wildlife Damage Relief Guidelines, 2011, increased the relief amount for livestock losses. In recent years, no retaliatory killing of snow leopards was reported from the KCA.

WWF Nepal through funding from organisations including WWF UK and USAID has been providing aid to the KCAMC, as well as to other snow leopard areas in Nepal, for holistic species conservation. Other than research and conflict mitigation measures, these include habitat management activities to ensure adequate food for the blue sheep as well as livestock, climate-adaptation support and livelihood generation schemes, ensuring benefits to both wildlife and people.

“Our work over the past decade focused on five broad titles,” says Dr. Ghanashyam Gurung, Senior Conservation Director – WWF Nepal, whose research and initiatives led to the creation of the LIS scheme in the KCA. “Helping develop community-led conservation area management regulations for the KCA; building and institutionalising local KCA institutions; bringing the KCA within the government’s system with staffing and annual funding; providing basic community services and finally establishing a sustainable funding mechanism.”

Cut-off from the rest of the world, people in Yangma live a difficult life. Even basic medical facilities are a three-day walk away from Yangma. The locals are now acknowledging the potential of tourism, in hopes of better opportunities. Despite all their trials, the local community is helping KCA mature as a conservation model. Their involvement as citizen scientists has enhanced their ecological understanding, beyond cultural and monetary terms.

Nonetheless This delicate balance is susceptible to a lot of factors such as the surprise return of wolves over the past three years and more frequent attacks on livestock. A climate change study predicts a 30 per cent potential loss of snow leopard habitat in the Himalayas. Construction of roads through ecologically sensitive areas is another concern.

Apart from conservationists and local communities ‘outsiders’ too need to be actively involved. In an interconnected world, these locals live like ‘mountain ghosts’, in the shadows of our actions. What we do, decides their future, as it does our own. 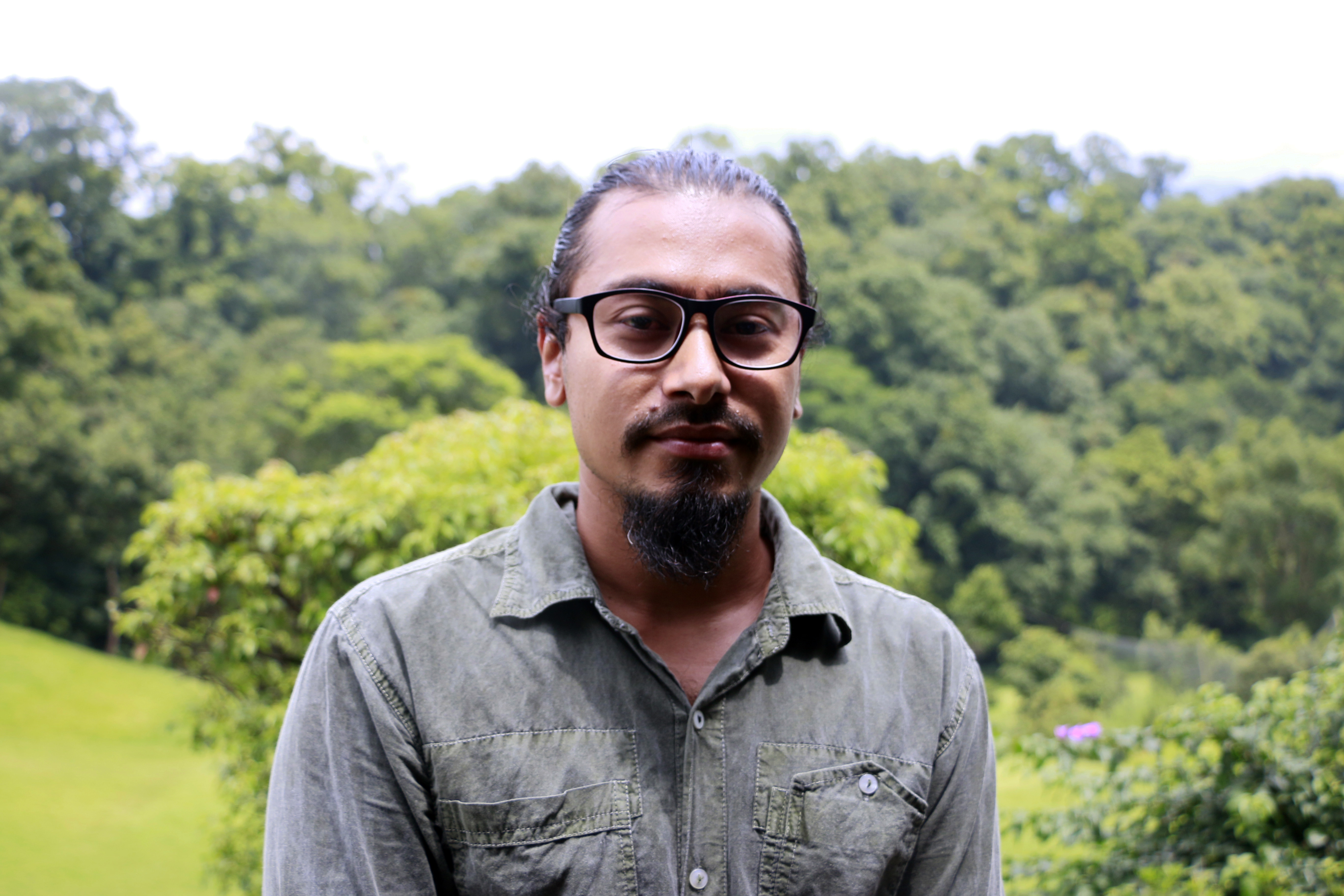 About the Author:
Sheren Shrestha works as the Senior Research Officer-SHL in WWF Nepal.