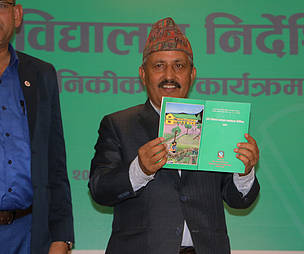 Speaking at the event, Giriraj Mani Pokhrel, Minister for Education, Science and Technology said, “I am thankful to the Centre for Education and Human Resource Development and partners for the timely launch of the Green School Guideline. The right of children and young people to live in a clean environment needs to be upheld and through a quick coordination and implementation of the guideline from the federal to the local levels we will need to look at this as a broader campaign towards this end.”

The eight-part guideline promotes the concept of ‘One Garden, One School’ and schools as a Living Laboratory while engaging school children in conservation awareness and tree plantation programs. The guideline will be implemented with the coordination between the local, state and federal governments, school management committees and development and conservation agencies in Nepal.

The guideline not only sheds light on the commitment shown by the government of Nepal towards the environment but is also an important step towards developing the next generation of environmental leaders through education and community service.

“WWF Nepal launched its conservation education program in 1994 with the establishment of its first eco club in Bardia; the Green School Guideline cements our efforts to bring conservation education to children from a young age,” stated Dr. Ghana S Gurung, Country Representative of WWF Nepal. “The program has grown further to engage young people through The Generation Green campaign that aims to build a generation of youth committed to conservation and sustainable development in Nepal.” 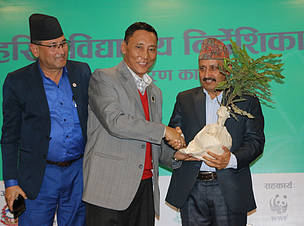